skip to main | skip to sidebar

This is the next twitter I expected to see. but no.
Posted by Leela at 5:05 PM No comments:

Find my Twitter page KLeelaMoore
Posted by Leela at 8:11 AM No comments: 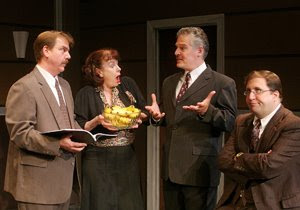 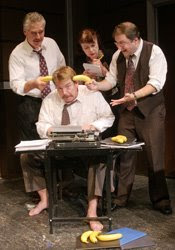 We all need a laugh and this play delivers. Please call me for pictures and please check out the Civic Players blog for more details - Leela

Moonlight and Magnolias
Go Gaga for Gone With the Wind

Schenectady, NY - October 7 - The Schenectady Civic Playhouse opens their 81st season, October 17th to 19th and 22nd to 26th, with the hilarious Hollywood comedy Moonlight and Magnolias, by Ron Hutchinson. It's the probable story of the last minute rewrite of Gone With the Wind's screenplay. Set in 1939 in the office of legendary producer David O. Selznick, he halts production of the famed movie for lack of a script. Director Victor Fleming is called in from the set of "Wizard of Oz" and writer Ben Hecht is called in for writing help, but he hasn't read the book! Selznick and Fleming act out all the parts in the play while the writer gets it all down.


The men slowly lose their minds but not their funny bones. The play premiered in Chicago in 2004. The Chicago Sun-Times called it "a hyperventilating slapstick comedy" and Howard Kissel of the Daily News said, "Frankly my dear, this is one funny play".

The Green Room display will feature a movie memorabilia exhibit from the collection of Joseph Fava. During intermission complimentary coffee and tea will be served.

New seats have been installed in the historic Civic Playhouse, and they are both beautiful and comfortable. The Playhouse is continuing a seat campaign for theater patrons to have a plush seat named in their honor. All money donated to the seat campaign is fully tax deductible.

The playhouse is posting a blog for audience members to share reviews, thoughts, insights and comments on this production at http://civicplayhouse.blogspot.com/
The historic Civic Playhouse is set in the Stockade District at 12 S. Church Street. Evening shows start at 8 PM, Sunday afternoon matinees at 2:30 PM. Call the box office at (518) 382-2081 or visit www.civicplayers.org for tickets.

Leela
Educated as a fine artist, I've been employed in just about every aspect of the graphic arts from photography and design to writing, printing and publishing. An early adopter of technology, I've been involved in the development of ink jet printers for the graphic arts and the movement of artists toward self publishing. I work as a publicist, specializing in graphic arts technologies, fine arts and performing arts.